A scientist has spent 14 years analyzing photographs of one of the world’s most famous paintings.

The faint traces of a charcoal underdrawing, visible thanks to multispectral analysis, are evidence of the spolvero technique, in which the artist pricks tiny holes along the outlines of the drawing and uses charcoal dust to transfer the cartoon to canvas.

The discovery, published by scientist Pascal Cotte in the Journal of Cultural Heritage, was more than 15 years in the making. In 2004, the Louvre allowed Cotte to take photographic scans of the Mona Lisa, and he’s spent the intervening decade and a half tirelessly poring over the more than 1,650 resulting images.

“The Louvre invited me because I am the inventor of a new very high-resolution, highly sensitive multispectral camera,” Cotte told Artnet News in an email.

With his Lumiere Technology camera, Cotte’s pioneering “layer amplification method” is able to detect light reflected on 13 wavelengths, building on the work of infrared photography, which has previously been instrumental in making visible to the naked eye details hidden beneath the surface of a painting.

Cotte was able to spot the underlying charcoal lines in the lighter areas of the painting using a combination of near-infrared photography and infrared reflectography.

“The optical system allows us to see very fine details and the high sensitivity allows a very high amplification of low signal,” Cotte added. “The spolvero on the forehead and on the hand betrays a complete underdrawing.”

This is the first time a spolvero has been spotted in the famous painting, which raises the fascinating possibility that somewhere out there, a paper drawing of the Mona Lisa by Leonardo’s hand may still exist—and that it would feature a slightly different pose, as the underdrawing shows the artist made adjustments to the final composition.

The paper notes that the cartoon may have been used to create other copies of the painting, like the version owned by the Prado in Madrid.

Cotte’s research revealed other heretofore unseen details, like what appears to be a hairpin just above the Mona Lisa’s head—something that would not have been in style at Florence at the time of the painting’s creation. Cotte told the Express that the hairpin suggests that the painting wasn’t a portrait, but an allegorical work, or a depiction of an “unreal woman, like a goddess.” 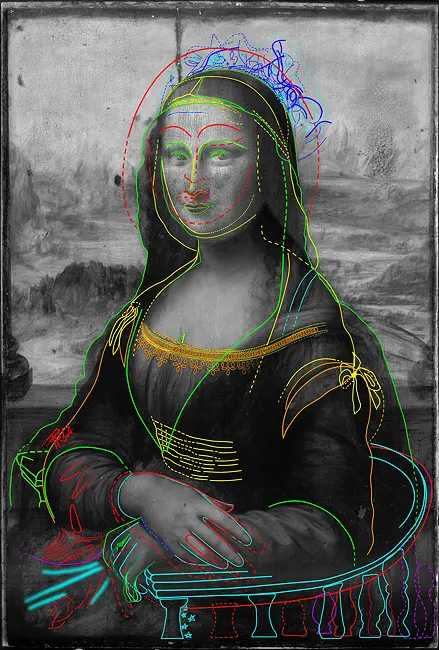