A Nude That Artemisia Gentileschi Painted for Michelangelo’s House Was Covered Up Because It Was Too Racy. Now It Has Been Revealed

Between now and April, visitors to Florence’s Casa Buonarroti, the house museum of Italian Renaissance great Michelangelo, are in for a treat. They can watch a team of experts as they work to restore Artemisia Gentileschi’s Allegory of Inclination, using technology to determine how it would look without the prudish draperies that have censored the artist’s nude woman for hundreds of years.

The painting, which Gentileschi created on Casa Buonarroti’s ceiling in 1616, is an allegory illustrating “the inclination to produce art.” It was commissioned by Michaelangelo’s nephew, Michelangelo Buonarroti the Younger, as part of a series of works by 15 young Tuscan artists made in tribute to the famed artist.

Gentileschi spent seven years in Florence between 1612 and 1620, during which time she became the first female artist accepted into the Accademia delle Arti del Disegno (Academy of the Arts of Drawing). The Allegory of Inclination includes a possible reference to another academy member and Gentileschi’s personal friend, the astronomer Galileo, in the form of the compass the woman is holding.

That Gentileschi was able to paint a nude female figure for her Casa Buonarroti commission—her first in the city—is another marker of the exceptional nature of her professional career.

Artemisia Gentileschi lived in a world where women were excluded from the study of anatomy—a gender-based limitation that continued until the early 1900s. Her painting of the nude figure representing ‘Inclination’ not only proved she was up to the challenge of anatomical drawing and painting—but that, as a woman, she could very skillfully put the female body at the centre of the canvas,” restoration donor Margie MacKinnon said in a statement.

In 1684, Leonardo da Buonarroto, the younger Michelangelo’s great-nephew, decided that he wasn’t comfortable with nudity in his home. To spare his wife and children the sight of a naked woman, he hired Baldassarre “Il Volterrano” Franceschini to cover up the painting’s naughty bits.

The initiative to strip the figure of Inclination to her original appearance is called “Artemisia Unveiled,” and its being funded by Calliope Arts, a British nonprofit celebrating women’s historic achievements founded by MacKinnon and Wayne McArdle, along with British philanthropist Christian Levett.

The hope is to use modern diagnostic and imaging technologies to determine what lies beneath the Il Volterrano additions, and to recreate the original painting so viewers can finally see the work as Gentileschi intended.

“Through working photographs, diagnostic imaging and analysis, we will be able to determine the exact technique Artemisia used, correctly map the work’s condition, and monitor our treatment plan for the painting,” the project’s head conservator, Elizabeth Wicks, said in a statement. “Due to the historic nature of the repaints, it is not possible to remove them from the surface, but the scope of our diagnostics will facilitate the creation of a virtual image of the original that lies beneath the surface.”

The team plans to examine the painting with a digital microscope, and to use diffuse and raking light sources, UV and infrared research, X-ray and high-resolution reflectography, and Hypercolormetric Multispectral Imaging and examination, among other analytical techniques.

To conduct the restoration work, the painting has been taken down from the ceiling and moved to the museum’s model room, where work will be conducted during opening hours. Every Friday, conservators will be on hand to answer visitor questions about the process.

“To see Artemisia’s painting come down from the ceiling was very emotional, because none of us had ever seen a painting descend from there before,” Casa Buonarroti Foundation president Cristina Acidini said in a statement. “Most likely, it has never been taken down, since it was painted in 1616. So, this is the first step of a great adventure.”

Following the restoration work, the museum plans to hold an exhibition about the project and its findings from September 2023 to January 2024.

“The show will spotlight conservation findings and explore the context surrounding the painting’s creation, including the significance of her Florentine debut and her key relationships with Grand Duke Cosimo de’ Medici and the city’s cultural milieu,” Casa Buonarroti director Alessandro Cecchi said in a statement.

“Artemisia Unveiled” is the first step of a multistage refurbishment project at Casa Buonarroti planned for 2023. The institution will update the lighting system that illuminates the ceiling paintings, allowing visitors to better appreciate those historic works. Work on the museum entrance and gallery signage will follow. 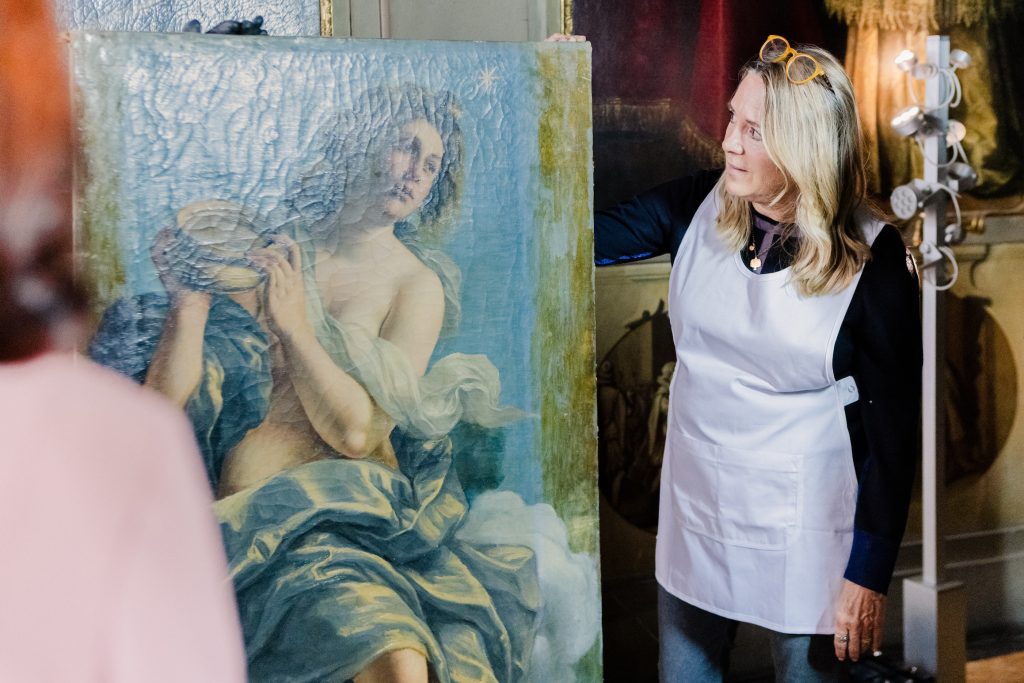