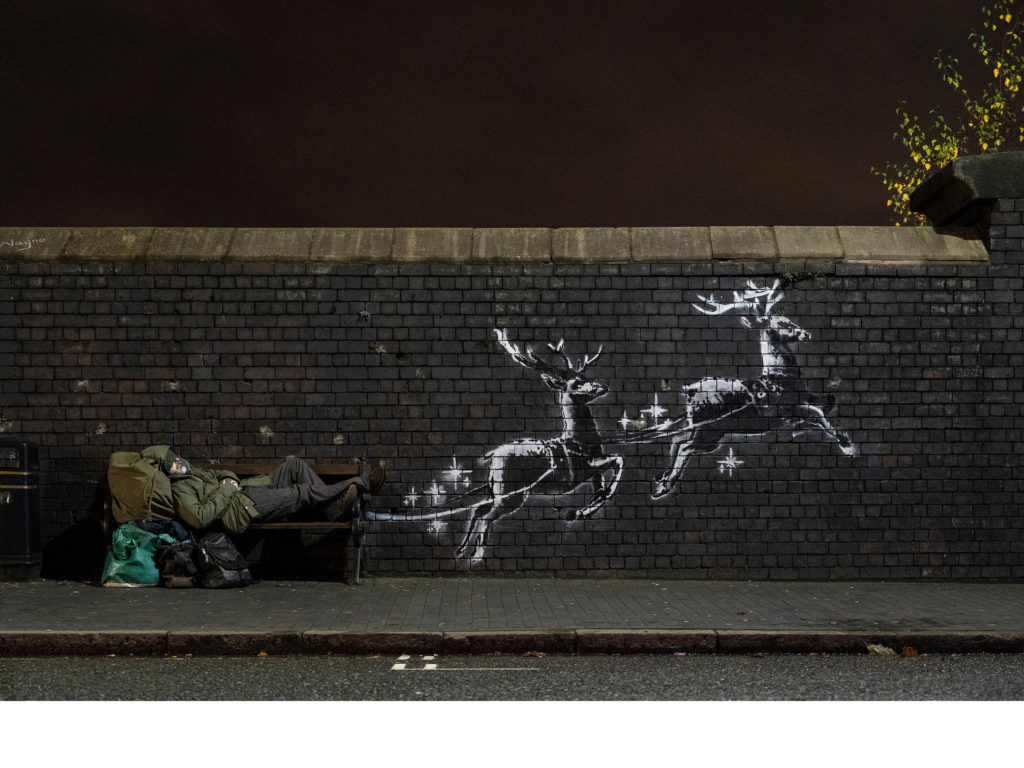 The art world’s resident mischief-maker is at it again. In a video posted on Instagram just this morning, the mega-popular graffiti artist Banksy shared a short clip featuring his newest outdoor wall work located in Birmingham, United Kingdom.

First appearing today on Vyse Street in the English city’s jewelry district, Banksy’s latest installation is paired with the video; together they highlight the fact that homelessness has reached record highs in the UK.

Executed on an otherwise nondescript brick wall in the artist’s signature black-and-white palette, the mural portrays two of Santa’s magical reindeer ascending into the air. In lieu of an elaborate sleigh filled with toys, the animals appear to be “tied” to a nearby public bench, implying that the fantastical pair has essentially commandeered the bench (and anyone sleeping or sitting on it) for flight into the winter night.

Banksy’s identity as a political activist has long impacted his artistic oeuvre. (For instance, in 2017, he offered free prints to the citizens of his hometown of Bristol in exchange for their vote against Conservative party candidates in the election. The promotion, however, was quickly nixed by authorities.)

This newest campaign surrounding the issue of ubiquitous homelessness in his native country is particularly acute; released just days before the country’s December 12 general election, the installation is made even more poignant when considered in tandem with the related video.

The short film, uploaded to the artist’s official Instagram account, is set to a somber rendition of the classic holiday tune “I’ll Be Home for Christmas,” and focuses on a presumably homeless man as he chooses where to rest his head for the night. (The video’s caption only vaguely identifies him as “Ryan.”)

The audience watches as the man rests his bones and belongings on the very bench that is adjacent to Banksy’s reindeer mural, producing the illusion that the enchanted creatures are whisking him away with them on their journey into the starry December sky.

“God bless Birmingham,” the post’s caption reads. “In the 20 minutes we filmed Ryan on this bench, passers-by gave him a hot drink, two chocolate bars and a lighter—without him ever asking for anything.”

An analysis released last month by Shelter, a charity that campaigns to end homelessness in England and Scotland, reported that at least 320,000 people are currently homeless in the UK. Birmingham, the city Banksy chose as the site for his latest project, reports particularly severe figures, with 1 in 73 people living without a place to call home.