Renaissance works transported for first time since the artist installed them in churches 600 years ago
Daniel Boffey in Brussels   Thu 3 Mar 2022 11.02 GMT

Three of the four pieces, a relief, a statue and two bronze doors, from Siena Cathedral and San Lorenzo baptistery in Florence, are also being restored to their former glory using techniques ranging from chiselling with porcupine needles to thermographing to discover structural weaknesses.

The delicate operation is taking place ahead of the first ever exhibition of all major works by Donatello (1386-1466), the Florentine-born sculptor who was reputedly the first genius of the Renaissance period.

From 19 March 2022 until 31 July, the Fondazione Palazzo Strozzi and the Bargello in Florence, home to Donatello’s most famous marble, David, will jointly showcase around 130 sculptures, paintings and drawings with loans from over 50 of the world’s leading museums and institutions.

They include the artist’s world-famous bronze relief of the Feast of Herod and two 50cm high statues, Virtue Hope and Virtue Faith, from the baptismal font in Siena Cathedral, along with the bronze doors of the Sagrestia Vecchia di San Lorenzo in Florence’s Basilica of San Lorenzo.

None of those works have ever previously travelled from the original churches in which Donatello installed them in the 15th century.

Francesco Caglioti, curator of the exhibition, Donatello, the Renaissance, said the task of disassembling and moving the pieces had been a challenge but gratifying as “exhibitions named after [Donatello] so far have mostly been done by exhibiting copies or limiting the choice of originals to a few pieces”.

His 60cm by 60cm gilded bronze panel of Banquet of Herod, one of the Florentine artist’s most significant works, shows multiple scenes of the presentation of John the Baptist’s head to King Herod on a golden platter by a kneeling soldier. Musicians are in the background, while Herod withdraws in horror while two children flee, one of them tripping as he turns to look at the grim scene.

Following his success with this relief in 1427, Donatello became a favourite of the Medici family, who commissioned him to make bronze doors in the Basilica of San Lorenzo, completed between 1434 and 1442. Each door weighs 80kg. The Basilica is the burial place of all the principal members of the Medici family.

The doors of the Sagrestia Vecchia, the statue Virtue Hope and the relief of Herod’s feast were transported to the Laboratories of the Opificio delle Pietre Dure in Florence for restoration before being transported to their place in the exhibition.

Thermographs, or thermal imaging, was used to highlight structural weaknesses in the works. Over time the copper contained in the bronze alloy in the works had turned green, particularly in the central part of the two doors where people still push them open.

The sculptures were dusted using soft-bristle brushes and washed with steamed demineralised water, organic solvents or bicarbonate solution. Probes, Plexiglas tools, porcupine needles and other tools made of soft wood were deployed for cleaning and finishing the minute engravings in the metal. A coat of microcrystalline wax was applied at the end to offer long-term protection. The Virtue Faith statue will be restored after the exhibition.

A spokesman said moving the works to the exhibit had been undertaken with the greatest of care and the highest security.

“The works have been placed in special crates prepared according to museum standards and managed closely to ensure the protection of the works,” he said. “The crates are equipped with a suitable locking system for the work. The transport is carried out with airconditioned vehicles equipped with adequate shock absorbers.”

The Staatliche Museum in Berlin will host its own version of the exhibition from 2 September 2022 to 8 January 2023, and the Victoria and Albert Museum in London will stage its exhibition in 2023. But the works from Siena Cathedral and Florence’s Basilica of San Lorenzo will not leave Italy. 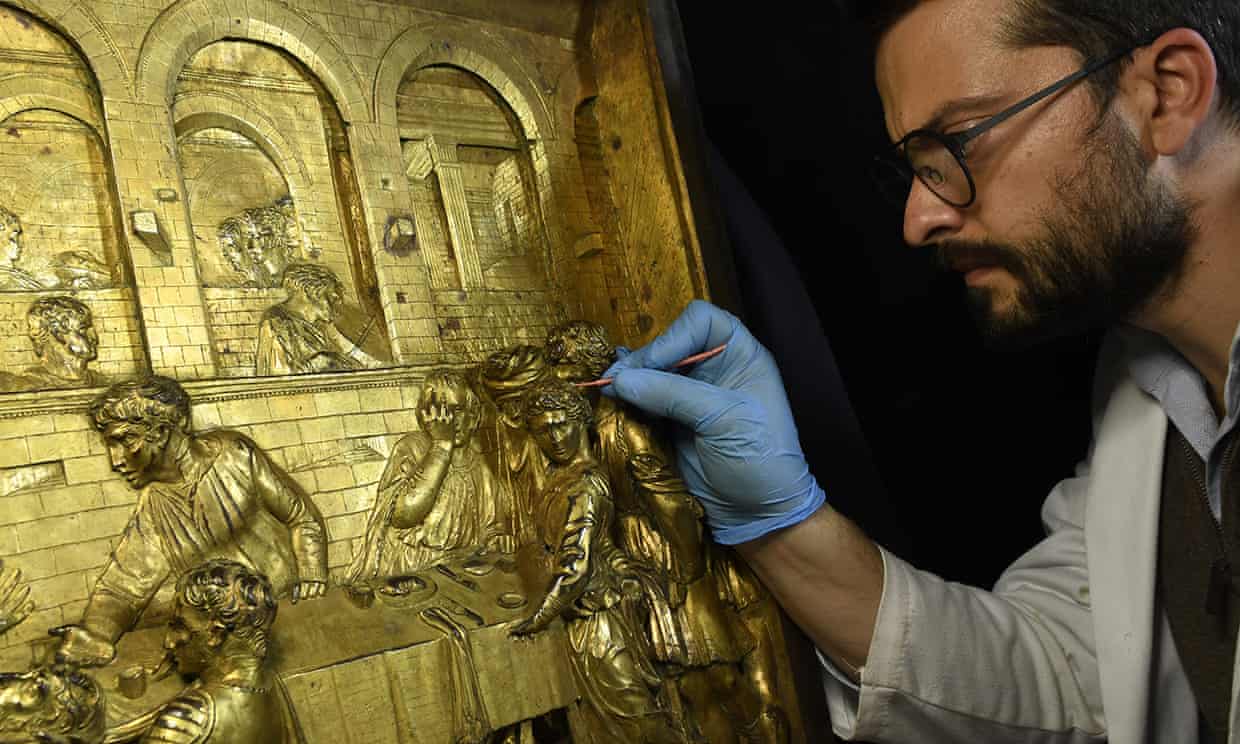 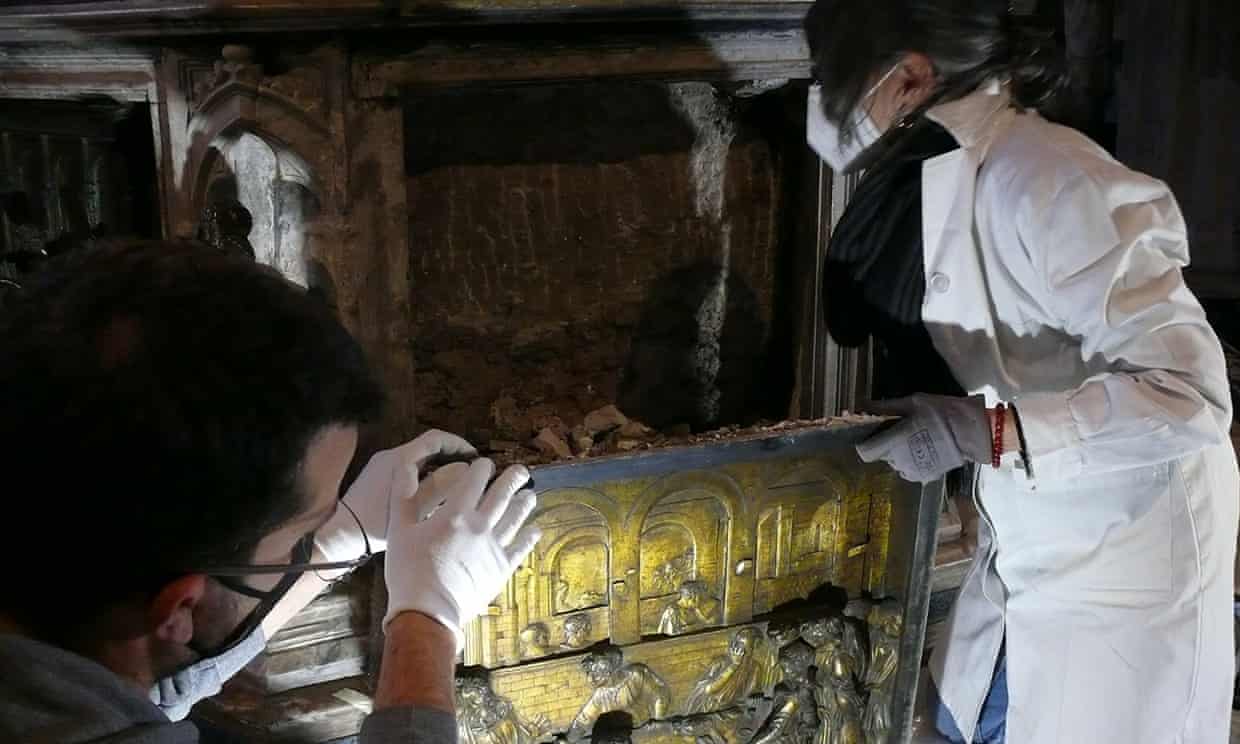 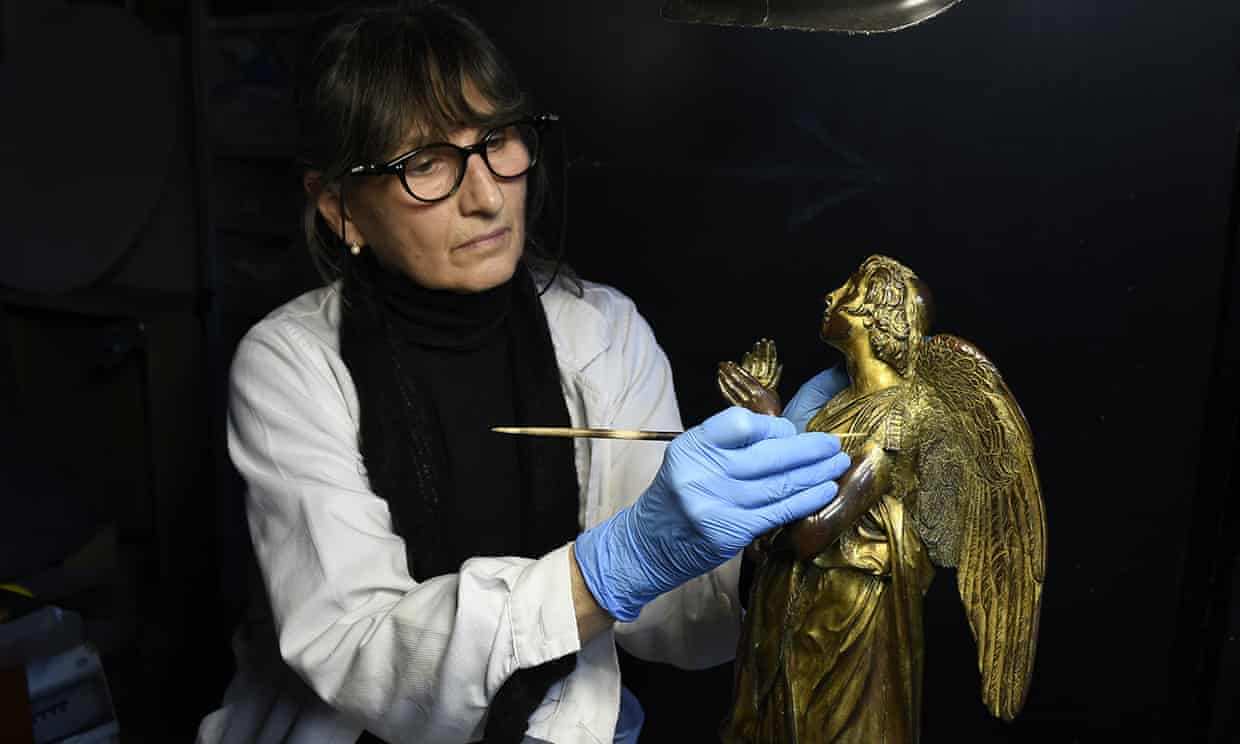