GCI – The L.A. Story of a Freeway Mural

As you drive along the Fourth Street off-ramp from the Harbor Freeway (I-110) in downtown L.A., you’ll see a woman running toward you, arms raised in triumph.

Get InspiredEnjoy stories about art, and news about Getty exhibitions and events, with our free e-newsletterSubscribe now

The city skyline emerges behind her as she breaks through a wall of stone bricks to reach the finish line. Oh, she’s also 20 feet tall!

This victorious runner has graced the freeway since 1984 as part of Hitting the Wall: Women and the Marathon, a mural painted by L.A. artist Judy Baca. The creative process that brought this image to life is on display in Judy Baca: Hitting the Wall, a new Getty Center exhibition that includes Baca’s preliminary sketches for the work as well as a photographic reproduction of a portion of it. The exhibition also includes a new mural Baca created especially for the presentation, La Salsera (The Salsa Dancer). 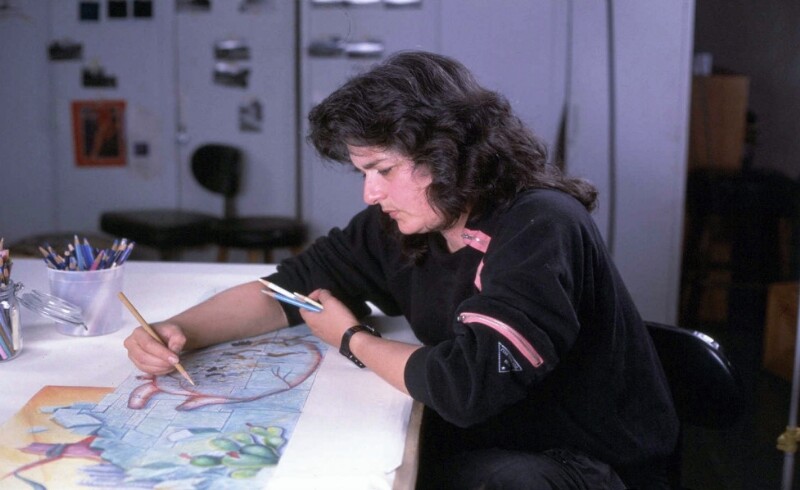 The show accompanies another new Getty Center exhibition, The Lost Murals of Renaissance Rome, which explores the spectacular narrative frescoes that adorned many prominent buildings in Rome in the 15th and 16th centuries. Together, the two exhibitions explore a long and storied creative practice whose artists share similar techniques and whose challenges include preservation.

“I want people to recognize that there’s a tradition of people putting color into their physical environments, and that decorating our spaces and making spaces more palatable, human, livable, and expressive of the people who live in them is a tradition that goes on throughout history,” Baca said.

The Olympic Organizing Committee commissioned Baca to create a wall painting in honor of the 1984 L.A. Summer Games. Her design paid tribute to the women’s marathon, which was added to the Olympics that year. Baca made a series of drawings to plot out her proposal. Like many Renaissance muralists, she structured her layout around the golden ratio (a mathematical formula often used in art and design) to determine the composition of the mural and ensure that all elements of the mural were harmonious—even when viewed from various perspectives.

“No element in the mural is randomly placed,” Baca said. “I think that’s one of the things [Renaissance muralists and I] have in common, the use of a structure which is determined by mathematical ratios in the composition.”

Another parallel between Baca’s murals and Renaissance ones: the challenge of preventing the works from disappearing due to natural erosion and degradation or deliberate destruction. In Baca’s case, this came in the form of graffiti and whitewashing. In 2019, a graffiti abatement contractor for the Los Angeles County Metropolitan Transport Authority (Metro) painted over the entire piece. Though the mural was clearly evident, Metro said due to “extensive graffiti,” the contractor didn’t even realize there was a mural underneath.

Baca and her colleagues from the nonprofit she founded, the Social and Public Art Resource Center (SPARC), sued Metro and Caltrans and reached a settlement under which the artwork was restored at the agencies’ expense. For Baca, the incident was infuriating, and she said she hopes the exhibition shows the degree of artistry that goes into a mural.

“Every aspect of the mural and the application of the paint is laboriously done. This isn’t something you put up in minutes,” Baca said. “Hopefully the exhibition will help people understand the amount of labor that is required to do a mural of this scale, the amount of struggle and physicality.”

It took Baca and her team nine months to finish Hitting the Wall, which required working on the side of the freeway on 20-foot-tall scaffolding, inhaling car fumes, and watching distracted drivers almost hit them. The artist and her assistants even developed a system of sign language to communicate with each other because of the loud freeway noise.

The Future of Mural Preservation

In Baca’s new mural, La Salsera, a dancing woman makes her way through MacArthur Park to catch a bus on Wilshire Boulevard—a major thoroughfare for L.A.’s domestic workers. Her body is filled with monarch butterflies, representing immigrants and migrations. The mural utilizes a new technique in which digital images are printed with minerals (rather than ink) and baked into multiple layers of glass. This process creates a long-lasting mural whose colors are less likely to fade from exposure to sunlight and offers new methods of preservation. The mural is now reproducible.

“With the new digital techniques, I can take a mural and move it and reprint it at a different scale and put it back up,” Baca said.

Like many of the murals seen in L.A. (and other cities around the world), La Salsera and Hitting the Wall embody civic pride while also bringing art to people who may not go to museums. That, said Baca, is why wall paintings should be protected as carefully as any other work of art.

“If there are images placed on the street that speak to [local people’s] experiences and their cultural knowledge, they’re engaged, and these become incredibly beloved sites,” Baca said. “When these images are disappeared, the people feel that they are being disappeared. Preservation and conservation take on a whole additional meaning to these communities. And that’s what we have to remember.”

Judy Baca: Hitting the Wall and The Lost Murals of Renaissance Rome are on view at the Getty Center through September 4, 2022.