Street artist KAWS is donating a valuable artwork to New York’s American Folk Art Museum—and no, it’s not one of his popular “Companion” figures. It is a rare sculpture by the self-taught artist William Edmondson (1874–1951) that has being dubbed “the Holy Grail” of American folk art.

In 2019, graphic designer and art collector John Foster spotted the 10-inch-tall stone carving, believed to be the artist’s long-lost Martha and Mary sculpture, on the front porch of a St. Louis home owned by Sally Bliss and Jim Connett. Foster drove past the home, but the moss-covered lawn ornament stuck in his mind, and he returned some days later and rang the couple’s doorbell. A closer look at the sculpture convinced him it was done by Edmondson.

“It was like finding the Holy Grail,” Foster told the New York Times. “Edmondson worked in Nashville, so who would ever dream that a piece would be in St. Louis?”

As it turned out, Bliss acquired the piece through her late husband, Anthony A. Bliss, who had served as executive director of the Metropolitan Opera. His parents, Cornelius Newton Bliss Jr and Zadiee Bliss, were collectors, and his aunt, Lillie P. Bliss, was one of the founders of New York’s Museum of Modern Art.

And it was MoMA that organized one of the two shows dedicated to Edmondson’s work during his lifetime. That exhibition, in 1937, was the first solo show by a Black artist ever held at the institution.

A self-taught sculptor born on a plantation near Nashville, Edmondson was the son of a former enslaved couple. He was inspired to begin sculpting at age 60, when he believed he had a vision of God telling him to carve a tombstone. Working with repurposed railroad spikes as chisels, he used the remnants of demolished buildings and other discarded stones to create some 300 sculptures during his lifetime, including grave markers, lawn ornaments, and bird baths.

In 1936, about two years after he started sculpting, Edmondson’s work, which had by then filled his backyard, caught the eye of a neighbor with connections in the art world. That’s how he met Louise Dahl-Wolfe, a photographer for Harper’s Bazaar, and through her, MoMA director Alfred H. Barr Jr.

After hosting the Edmondson solo show, MoMA also included his work in “Three Centuries of American Art,” an exhibition it organized at the Jeu de Paume museum in Paris in 1938.

That was the last time anyone saw Martha and Mary, on loan from Zaidee Bliss, who had purchased it while MoMA was planning the previous year’s exhibition. But when art historian Edmund L. Fuller put together the first monograph on the artist in 1973, Visions in Stone: The Sculpture of William Edmondson, MoMA failed to provide provenance information for the work. The book, which became an important reference on the artist, listed Martha and Mary as “owner unknown.”

But the truth was the work had stayed with the Bliss family during all those years—and found its way from Nashville to New York to Paris to a St. Louis front yard. Sally Bliss knew it was by an African American artist, but was fuzzy on the details. She thought it might have been by a “Robertson” when Foster first came knocking on her door.

Foster then called Rousseau to come look at the piece.

“My heart jumped when I saw images of the work—I knew instantly what it was… even draped with a coat of green moss,” she said.

Edmondson’s lost Martha and Mary represented an important subject for the artist that he turned to at least eight times throughout his career.

“In the Bible, when Jesus visits the sisters’ home, Mary chooses to contemplate his teachings while Martha is preoccupied with preparing food. This story exemplifies the two women’s contrasting personalities—action versus contemplation—while warning against focusing on material rather than spiritual concerns,” Rousseau said. “In Edmondson’s representation, the sisters’ differences seem to have temporarily vanished: the women are tenderly sitting shoulder to shoulder, like identical twins,” she added. “In their quiet posture, the pair’s passivity is transcendent. Their eyes are lost in thought and hands joined in front as they attentively listen to Jesus’ teaching.” 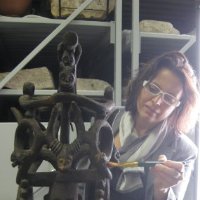 Conservator Linda Nieuwenhuizen carefully cleaned the sculpture, and KAWS, a member of the museum’s board of trustees, purchased it as a promised gift for the institution.

“As an admirer of William Edmondson’s work, I’m happy this sculpture will have a home at the American Folk Art Museum, where a wider audience might also discover the importance of this incredible artist,” KAWS said in a statement.

Although the museum has declined to reveal what KAWS paid for the artwork, Edmondson currently holds the record for the most expensive work of Outsider Art ever sold at auction, with his sculpture Boxer making $785,000 at Christie’s New York in 2016.

The Folk Art Museum has championed Edmondson since its founding in 1961, dedicating its first-ever solo show to the artist in 1965.

“This acquisition was particularly exciting for a variety of reasons,” Rousseau said. “It represents the rediscovery of a major sculpture hiding in plain sight [and] it led to research that revealed its fascinating provenance.”

Martha and Mary will make its debut at the museum in “Multitudes,” a 60th anniversary exhibition for the institution, opening January 21, 2022. It will be the first time the work will be on public view in 84 years—if you don’t count Sally Bliss and Jim Connett’s eagle-eyed neighbors in St Louis. 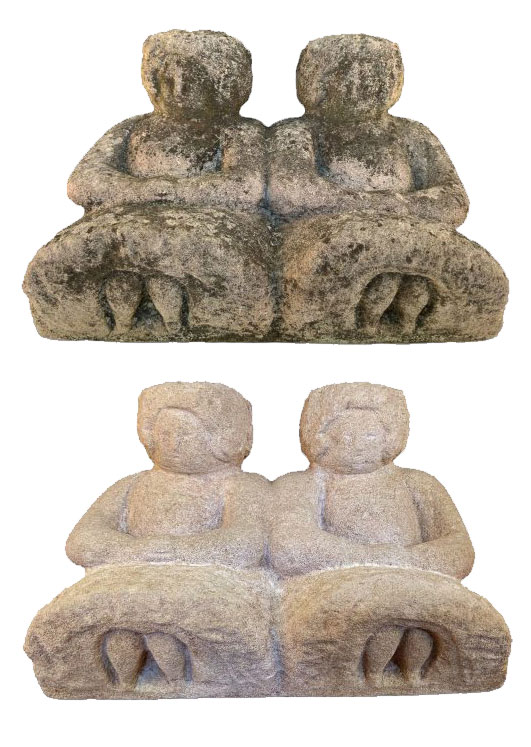