Louvre and sculptor work to restoration of Mosul monuments 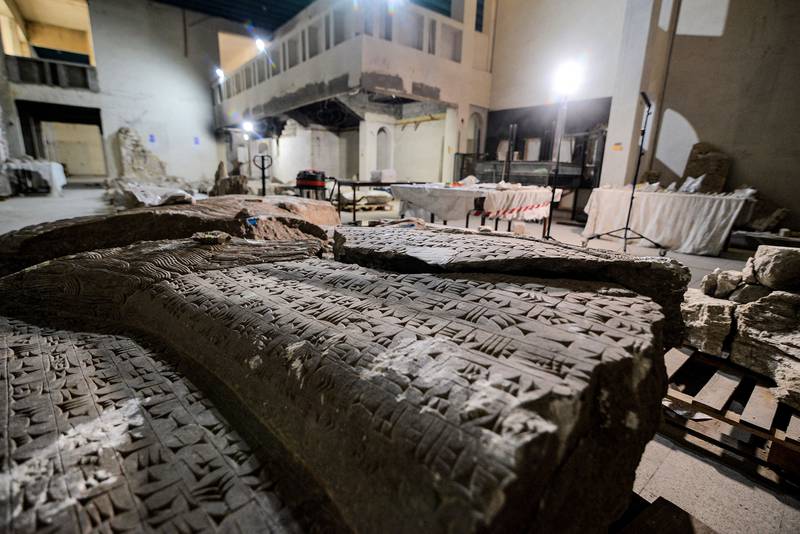 It was an emotional moment for sculptor Daniel Ibled and the Louvre’s director of eastern antiquities Ariane Thomas when they first stepped into the ruins of Iraq’s Mosul Museum.

The nation’s second-largest museum was ravaged by ISIS in 2014 as the extremists attempted to eradicate thousands of years of history by destroying the building and its contents.

On entering what remained of Mosul Museum, the pair knew he was about to face his biggest challenge yet.

“We were together when we first saw the damage,” Ibled told The National. “It was very sad to see what had happened and how quickly it had taken to do such damage compared to how long it will take to repair.

“The pieces were completely intact and magnificent and despite surviving for more than 2,500 years all of a sudden in a few minutes they had been destroyed. It was like a scene of war, you had all the exploded fragments all over the place.

When Iraq regained Mosul, the restoration of its heritage became a priority.

The Louvre in Paris has global expertise in restoring similar artefacts and was one of the first international teams to offer help and support to the museum in Iraq.

Along with the International Alliance for the Protection of Heritage in Conflict Areas, the Smithsonian Institution, Iraqi authorities and the World Monuments Fund, the team began the daunting task of painstaking restoration.

Ibled said: “It is definitely one of the most complicated and biggest things I have ever done.”

The contents of the Mosul Museum were of cultural importance and pivotal to Iraq’s history,” he said.

Mosul faces the 6,000-year-old archaeological site of Nineveh, the heart of the Assyrian Empire, and at one point it was the largest city in the world for several decades.

Its museum had housed treasures from the Assyrian, Hellenistic and Islamic periods and the Louvre experts have been focusing their efforts on a winged lion from the city of Nimrud, two winged bulls with human heads and the base of the throne of King Ashurnasirpal II.

When the Louvre team entered the museum at Mosul, all that remained from artefacts thousands of years old was a sea of fragments.

Ms Thomas told The National: “It was so terrible to see such damage. The pieces were so old and while they had survived more than 2,500 years, all of a sudden in a few minutes they had been destroyed.

“The Louvre was in charge of setting up a diagnosis and action plan in order to see everything that needed to be done from the state of destruction that we found.

“We still are in charge of the collections, there is enormous work in terms of restoration and Daniel, our hero restorer, is restoring the almost totally destroyed pieces. Among them, many are monumental in size.

“Many museums across the world have never faced such destruction before,” she said. “At the same time, we are doing the conservation work which requires an enormous team. We need huge tools and expertise and we are lucky at the Louvre to have quite a lot of knowledge as we have collections that are similar and pose similar problems and we had the expertise of Daniel that we could bring.”

Faced with a giant jigsaw of exploded pieces, it is now Ibled’s painstaking task to restore them.

“We had to separate all the fragments. Everything had to be referenced to know what it was so we could classify it and sort it and store it safely into boxes to do the conservation work.

“It is very complicated. I worked on the destroyed pieces in the national museum in Kabul and both have been very challenging. In Mosul it is made it even more challenging because I am dealing with Assyrian sculptures that were heavily monumental. They are very large and very heavy and some of the fragments are still damaged from the explosion. They are very difficult to move and to work with.

“This makes it even more challenging.”

The team has been piecing together the Assyrian throne and the lion statues.

“For the throne basis we have 85 per cent of the original monument,” Ibled said. “For the missing parts it will be an Iraqi decision whether or not to replace them with modern pieces or keep it as a damaged section.

“The throne base is flat so we don’t have many structural issues but we will have with the lion. If the missing part is structural, then we will need to replace it with a modern piece.”

The complex project was made even more demanding by the Covid-19 outbreak, which prevented Ibled from travelling to the site.

Instead, the international teams came up with a novel idea of making step-by-step videos to send to the Iraqi team on the ground so they could begin the work.

“We were supposed to start the conservation work by early 2020 but Covid-19 happened,” Ms Thomas said.

“We didn’t want to lose time … it’s very important that every day we move a little step closer towards restoration, so we adapted by developing an online training programme with short videos in order to communicate and to keep working with our colleagues in Iraq.”

The Louvre director said this approach meant preparation for the heavy restoration work could be done together, bridging the gap between Iraq and France.

“Finally, in 2021 that happened,” she told The National. “We started to be able to go to Mosul and carry out regular conservation work with them. Now we have made spectacular progress, which Daniel and his team can be very proud of. The destroyed pieces are finally taking shape again.”

The UAE has funded some of the restoration work. “It’s a real honour that we are able to help,” Ms Thomas said. “I hope something like this will never happen again but the fact that we can help our colleagues is magnificent.

“It is a very heavy responsibility because now we must do our very best so we do not betray these objects which are part of their history. They are the direct links to the past that has completely disappeared. We must try to make them live again, we must continue to be the doctors.“