Roman sanctuary discovered in the Netherlands

The site was first identified in 2021 by the Association of Volunteers in Archaeology (AWN), resulting in further excavations being conducted by archaeologists from RAAP, a consultancy and research agency for archaeology and cultural history in the Netherlands.

During the Roman period, the southern part of the Netherlands known as Germania Inferior was integrated into the Roman Empire. The Romans established several towns such as Ulpia Noviomagus Batavorum (modern Nijmegen) and Forum Hadriani (Voorburg), and smaller settlements that were reinforced with military forts along the Limes Germanicus.

During excavations in Herwen-Hemeling (municipality of Zevenaar), researcher from RAAP uncovered a Roman sanctuary that contains idols, reliefs and painted plaster. Several temples have stood on the site over the centuries, with complete votive stones or altars dedicated to Hercules Magusanus (a fusion of the Greek-Roman Hercules and a mythic hero named Magusanus), Jupiter-Serapis and Mercury. The team also found a large stone well with a staircase and evidence of sacrificial pits and fires that burned around the temples.

Roman sanctuaries are known in the Netherlands, but this is the first temple found on the border of the Roman Empire (Limes). The sanctuary was used by the garrisoned soldiers, evidenced by the discovery of many roof tiles with stamps, in addition to horse harnesses, parts of armour, spears and lance points. Dozens of votive stones were erected by high-ranking officers where they gave thanks to a god or goddess.

A press release from RAAP stated: “Never before has such a complete complex been found in the Netherlands with a temple building, votive stones and pits with the remains of sacrifices. In addition, the amount of limestone sculpture fragments is unprecedented.”

Various artefacts and finds will be placed on display at the Het Valkhof Museum in Nijmegen, with further plans to continue investigating the site. 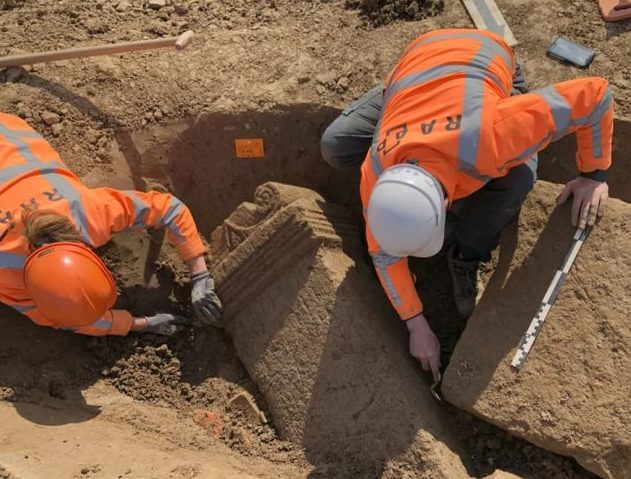